This is another post by Debashish Ray. As my readers are aware, he has been with the Indian Railways for a long time and this post muses on something that we all know about but prefer not to discuss!However do we really know? Find out!!

Aww Shit
By Debashish Ray
My Grandmother had just passed away at Jabalpur. I was a trainee then and had managed to get to Allahabad, to try for a berth for the onward journey. All to no avail - the train to Jabalpur was heavily overbooked and there was no place. So I opted for the unreserved third class coach, which was already so packed that it was difficult to even get in. I managed to squeeze in but could only find place for one foot as there wasn’t space for the second! The train moved on with me alternating on my feet. After a couple of hours I could take it no more and even riding on the buffer seemed preferable. So off I went at the next halt to stand on the buffer housing. The other buffer was already occupied, by one of those kids who live by their wits in all big stations. He appeared quite unperturbed, probably inured to this form of travel. Drawing confidence from his nonchalance I sat down on the casing with my feet on the edge of the buffer flange. And so we moved along without a word exchanged for the next two hours.

The sleepers flashing beneath, monotonous in their regularity, were like so many Sheep. Worse, the metronomic clickety-clack of the joints made me drowsy. Rather than risk a fall, I studied the information on the end of the following coach. That didn’t provide much reading, so my attention settled on the spots of mud which seemed to have been spattered on the end of the coach. They were mud thrown up during run, I reasoned. It took me some time to realize that the ‘mud’ was really dried feces from the lavatory of the leading coach, - the one on whose rear buffer I happened to be sitting. I thanked my stars that I had chosen a trailing buffer to sit on. I would not be spattered with fresh turds. Some kilometres later I recalled that coaches were never reversed, only the rake was pulled from the other end. So my coach should have been the trailing coach on its last journey in the opposite direction. I looked round horrified to see that I had been resting my back on end wall of dry feces! So I got off at the next stop and went back to alternating on my feet like an elephant. That was near forty years ago. You, dear Reader, may well shake your head in amused disbelief, but how many of you know that lavatory effluents are still sprayed and spattered on to the ends of our coaches? Just look at the pictures below. 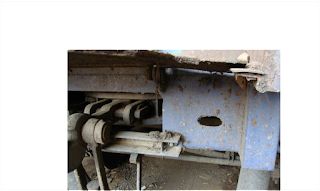 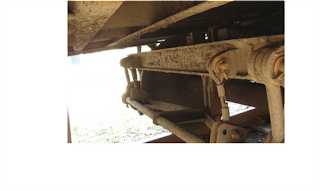 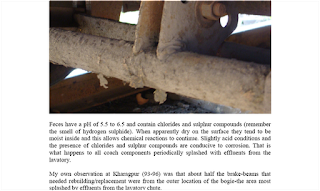 It was the same for the bogie headstock; it was always the outer side that needed corrosion repairs. Compare the picture of the bogie above with the next picture of the same bogie taken from the inner side of the coach below. The story is the same for the inner headstock, diagonals, outer headstock and fall plate. Their replacement and repair are all accelerated by the frequent spattering with feces and water. Add to this urine rich in chlorides, and you have a recipe for accelerated corrosion. The Automatic Controlled Discharge system used on LHB coaches has not helped much. The outside face of the bogies is still heavily caked with discharge and mud. These will retain moisture allowing the corrosion reaction to continue on the metal surface. Compare the ends of some LHB bogies during POH at Lilluah Shops. Note the heavy caking on the lavatory side and the absence of this layer on the bogie not facing a CDT, in the next two pictures. 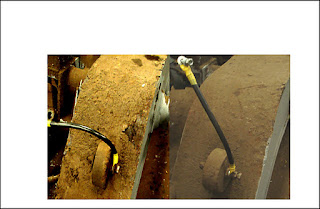 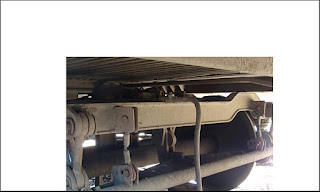 Even more telling was the Dy. CME AK Gupta’s comment that the Generator Cars showed little corrosion damage. This LHB coach has only one toilet used by a few attendant staff; little water and effluents means small corrosion problems. What happens when the double-decker coaches, now being built, discharge double the matter onto the bogies? Sometime back Mr. Dhasarathy (then Member Mechanical, Railway Board) in a personal communication said, that he’d once inspected forty year old EMU coaches and they showed less corrosion than the main line passenger coaches. Essentially it’s the discharge from the toilet that has to be tackled on priority. Tackling anything else, will not give comparable benefit. The root cause is periodic wetting of under frame and bogie by effluents from the lavatory chute. We need to take up any method of controlling this issue for our own good. All those years that I was in railway service, the stress of the Department was on making the lavatory floor as water tight as possible. I do not recall even one official mention of the corrosion damage caused by the effluent discharge under the coach. For that matter trough floor corrosion from flooding the coach insides during cleaning at coach maintenance depots, also received scant mention. The discharge chute received attention only when the Engineers claimed that toilet discharge was corroding rails. What about the damage and delay to our own coaches? Perhaps the Department has been looking without seeing. But there is also an attitudinal problem. We have never given importance to finding alternative toilet design. Trials have been wishy-washy to say the least. No control and no sense of urgency. It is the Department which will stand to benefit from a non discharge toilet system. We should be doing this for our own benefit, not because the Engineers are complaining about track corrosion. If the Mechanical Department of the railways is to get out of the ‘deep shit’ that it is in, then we need to modernize the toilet disposal fast. But first we need to upgrade our attitude. A thousand years ago King Canute said “Time and tide waits for no man.” Neither does it wait for a Department. (All photographs by the author) <