December 15, 2011
Driving in Malaysia is a pleasure. The highways are the best in the world and driving at 100 kmph is a breeze with wide three lane highways penetrating all over the country. Thus driving the 300 odd kilometers to Cherating took just over three and a half hours even after long halts for breakfast and coffee and once to refuel. The road travels over the Pahang hills that separate the capital from the eastern coasts. The road is spectacular, climbing high through dense forests as the exits to Bukit Tingii and Genting highlands beckon. 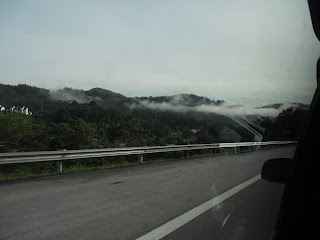 Cherating, well known for its magnificent beaches is in the East Coast of Peninsular Malaysia. Close to Kuantan, the capital of the Pahang state, it is at the border of the Sate of Terengganu, and is part of the idyllic, typically Malay part of the country, laid back, charming and with a sense of never ending beaches, fishing villages, forests and hills. Devoutly Muslim, the people of the East Coast have for centuries traded with China, Java and the Borneo islands and fished the turbulent sea south of the Chinese mainland. 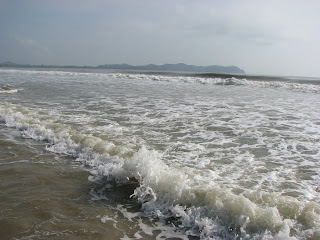 We had booked into the Suriya Cherating resort, located on the beach. When we reached there, it was too early to check in, so that we strolled over to the beach to stare at the rolling waves. The Malacca Straits barely produce any waves, but the South China Sea can be dangerous, the waves breaking harshly on the golden sands. The sky was clouded over, after all this is the monsoon season, but it did not rain. The Coffee Shop overlooked the ocean, which compensated somewhat for the less than brilliant fare.
After checking in, we booked ourselves into the Cherating River cruise and were soon picked up by Pak Su who welcomed us with grave courtesy and drove us to the Cherating River in his SUV. Here he handed us over to Hanif who was to take us for the cruise proper. 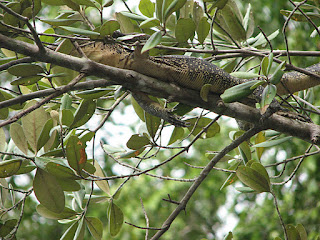 The Cherating River, now muddy following the rains, courses down from the highlands to the ocean, piercing the rain forest. Near the sea, it has a primal mangrove forest which is the home to a variety of wildlife. As we sailed up the river and then up one of its small tributaries, the teeming fecundity of the mangrove forest was always in evidence. We are familiar with Mangroves, after all we do come from the region that has the largest mangrove forests in the world, but even so, and there is a romance in floating lazily past a mangrove grove, even the leaves of which are home to bats and insects of all types.
The trees were alive with snakes. We spotted several Mangrove snakes, brilliantly coloured in black and yellow stripes. These are a diversion, because these stripes advertise the snakes’ threat, while they are really not poisonous at all. There was a python lying coiled in one branch of another mangrove while water monitors of various shapes and sizes sunned themselves at every possible perch. Crabs scuttled around the holes in the mudbanks, now exposed by the falling tide. 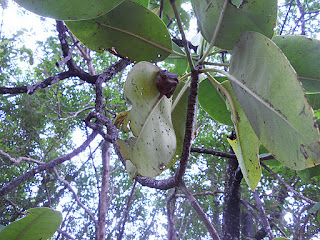 Later in the evening we went over to Terengganu state to find a well known eating hub at Kemantan where we had some of the best food we have had in many a day. It was difficult at first to make ourselves understood because here English is not spoken too much, but fortunately one young lady speaking impeccable helped us out. 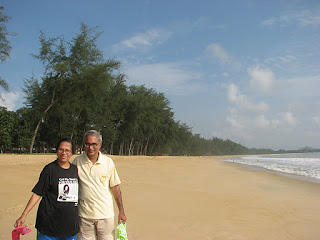 The next morning we walked on the beach, Susmita and me, leaving footprints in the pristine sand. The beaches are deserted at this time of the year, other than a small crowd near our hotel; we met nobody as we walked for miles along the sand. The sunrise disappointed, as clouds played spoilsport, but bathing in the sea was great fun, the waves forcing us back to the beach whenever we ventured out even a little. These waters can be dangerous, I had been told earlier, but we made sure that we stayed close to the shore to avoid any accidents.
During the drive back, we took the old highway. This road, while not so wide and as well maintained as the tolled road, is more interesting as it takes you through villages and forests and fields and water bodies. We drove about a 100 kilometers along this road before we entered the soulless highway which however brought us back to KL in record time. The traffic in KL was fairly heavy and a huge jam faced us just near home as there was a carnival on at the Bukit Jalil Stadium, but we managed to get back just before really heavy rains struck. Driving in this sort of rain would have difficult.
This time around we missed the snorkeling and the turtle nesting, but we will be back, sometime soon.
Beach Cherating