December 01, 2011
The last time that we had planned the trip, Mount Merapi took a hand. It spewed out lava , initially slowly, then with increasing intensity. However we still planned to go ahead with our trip, we thought we would see both a manmade wonder and a natural wonder at the same time. But no such luck, on the morning of our trip, we found, after reaching the airport an an unearthly early hour, that all flights were cancelled. 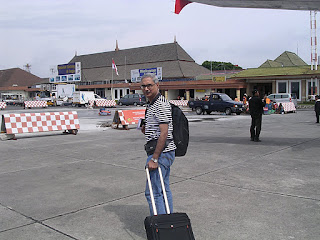 This time however the day dawned bright and cheerful, here in KL at least. In Yogyakarta it was another story. When the Air Asia flight landed in Yogyakarta, the sky was cloudy, as well it might be, the rainy season had started. But fortunately the rain held off and we lined up to get our visa on arrival. It is easy to book a car at the airport terminal itself. It is severely functional, is the terminal, but we could change our money and hire a vehicle to take us to see Prambanan and then transport us to Borobodur in the afternoon.
Changing money in Indonesia is good fun. You become an instant millionaire as you change money at the rate of about 2800 Rupiah to the Ringgit. It is difficult however to keep track. It is lucky that most people at least in Central Java are fundamentally honest and in general tell you if you are giving a 100,000 Rupiah note instead of 10,000. 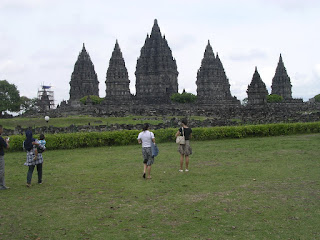 If we travel back in time to the middle of the first millennium, Java was even then a fairly well populated island, though much more thickly forested than it is today. Central Java in particular was ruled over by several dynasties, alternating their religious allegiance between the Hindu and Buddhist faiths. While Western writers lay much emphasis on the differing religious affiliations of the rulers, and marvel how competing faiths built such large monuments at about the same time only 60 kilometers apart; to us who do not belong to the Semetic religions, know that it is quite possible for someone to belong to both the faiths and to be just as equally aligned to both of them. Anyway, the rulers who built these particular temples we were to visit first were those of the Hindu Sanjaya dynasty.
A legend is associated with these temples, that of the Javanese princess Loro Jonggrang whose father was defeated in battle by Prince Bandung. When he proposed marriage, she reluctantly agreed to marry him, but set an impossible condition. He was to complete building a temple with 1000 statues before sunrise. Nothing daunted, the Prince called up the help of spirits who helped him build 999 well within the allotted time. Seeing her ruse failing, the Princess lit a huge fire in the eastern side of the building site. A cock crowed mistaking this for the sunrise and all the spirits melted away as well, leaving the task unfinished. Prince Bandung was furious when he discovered her trick and turned into a stone statue which still adorns the temple.
More mundanely these temples were built around 850 AD by the King Maha Shambhu of the Sanjaya dynasty, though there are some arguments on this. Surprisingly these magnificent temples were active for only about 200 years, after which they were basically abandoned when the political centre of gravity moved to East java. The repeated eruptions of the volcanoes in the area also perhaps had something to do with this. The temples were ruined in a major earthquake in the 1600s and lay scattered as huge abandoned site until they were restored in the last century. Even then there were many setbacks, most recently a couple of years ago when another earthquake broke one of the spires of a temple. This fragment still lies on the ground, awaiting another restoration attempt.
The drive to Prambanan from the airport takes about 40 minutes and soon we could see these magnificent structures surrounded by a huge park, now called Candi Loro Jonggrang. The way to the park was through green fields, water bodies and small houses, very reminiscent of home. Here are not the sterile antiseptic highways of Malaysia and Singapore, good to convey you from Point A to point B, but with nothing of interest in between. Throughout this route, there is life, movement and colour, it could be a scene from my native Bengal. 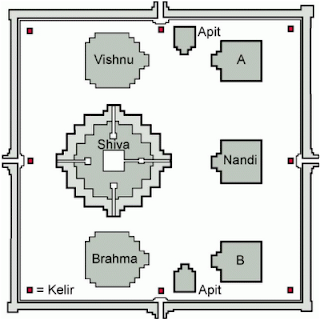 The temples are in two principal groups. One ring of temples which are in a bad state of repair, but are now slowly being reconstructed one by one, is the outer group. Here there were originally 224 temples. These are the Candi Perwara and they are grouped in 4 circles. In the inner square are the principal temples consisting of 8 temples, three large ones dedicated to Shiva, Brahma and Vishnu. We could not enter the Shiva temple as it was undergoing repairs after the latest volcanic eruption and the 2008 earthquake which had cause some damage. There are in addition 3 temples dedicated to the vahans of these respective deities.
We entered via a reception centre that caters to overseas visitors. It is cozy place where you can have a cup of coffee gratis and drink ice cold water, an essential in this weather. There is a film about the temple playing on a TV screen and you can hire a guide here. That is exactly what we did and he took us around the complex, explaining much of what I have related above. The temples’ facades have been carved with illustrations from the Ramayana. It is probable that these carvings which are so reminiscent of many such temples in India was supervised by master craftsmen who came from the Eastern Indian coast to these faraway lands and trained the local workforce. All this 1200 years ago, fully 5000 km away from the Indian heartland. It does invoke a feeling of pride to think that even then, India influenced so many people so far away. 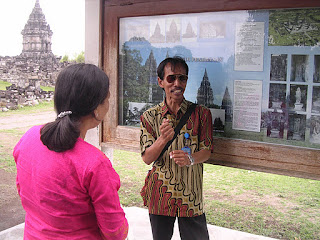 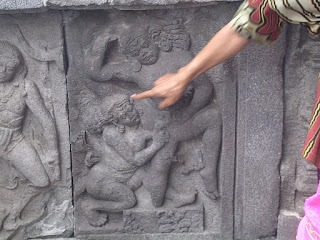 The temples are majestic and awe-inspiring. One wonders how many such temples fell prey to the iconoclastic zeal of later conquerors. Just as In India, the Indonesian islands also bear witness to many Buddhist and Hindu temples now taken over by jungles or simply left to ruin and their bricks carted away to make individual houses. But no one can deny that the influences that spread from the Indian Subcontinent were instrumental in the making of societies as far apart as the Vietnamese, Cambodians, Japanese and Indonesians. And this too, only by the force of ideas, with no element of force. 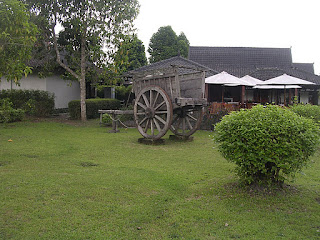 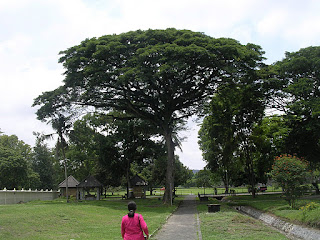 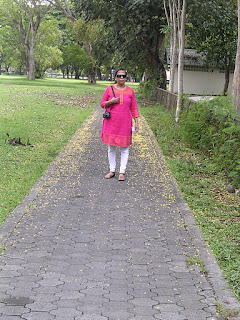 Outside this temple complex is a large park, full of shady trees and containing restaurants, gift shops and a museum. We visited the museum which is the repository of many images that have been retrieved from the ruins but have not been used for reconstruction yet. The park too is shady with many large trees many of which were flowering, the blooms carpeting the pathways. The mango trees were full of fruit as were many others The warmth however slowly became oppressive as the clouds cleared and the sun came out. We were glad to come out of the sun and resume our journey to Borobodur.
Inodnesia. Pramabanan travel

Dr. Bipasha Bose said…
Nice one! I too plan to visit this place. Even the temples in Bali were constructed around this time 840AD or so.

Please write something about temples of Bali as well on your blog.
December 3, 2011 at 1:22 PM