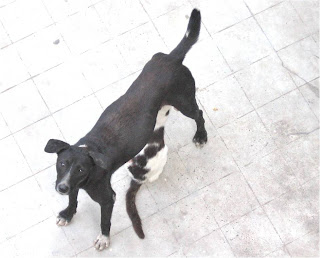 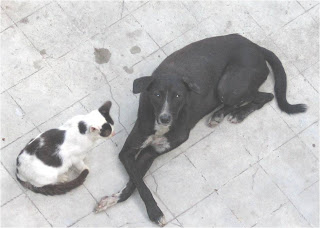 Both these heartwarming writeups have been penned by Mr Swapan Sen. I would like to thank him for another contribution to Reflections.

The Nursing Mother
Cats and dogs are not known to be friends. Cats walk away if dogs are around and dogs growl at cats if they come close. Well, there are exceptions. In my house, a female street dog had once taken shelter. We used to feed her regularly and soon she became very attached to all members of our family. A year after, she gave birth to eight lovely puppies. With the passage of time most of her puppies died of disease or were run over by cars when they tried to cross the streets. One was taken away by a dog-lover and the remaining one, as it grew a little, ran away in search of food leaving the mother alone. The mother was obviously lonely, sad and used to mourn the loss of her children, lying down quietly most of the time. It was around then a kitten came from a nearby house and after moving around the lonely mother, found her quite harmless. Soon a strange relationship developed between the two. The kitten became much attached to the mother and the mother too, starting nursing the kitten with her milk. I could manage to capture the nursing mother and her child in my digital. That was several years ago and neither of them are alive now. When I look at their old pictures, I feel a pang of sadness in my heart and wish they were still alive. There are many great wonders in this world but the relationship between the mother-dog and the kitten, she nursed, is a little wonder that will remain alive in my memory for ever. 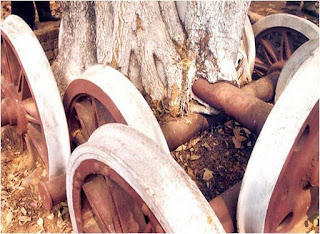 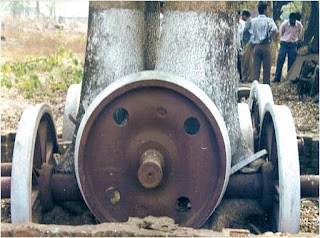 The Strange Story Of The Nursing Tree
The relationship between the nursing mother and child belonging to different living species is certainly a little wonder of the world. But the relationship between two objects, one being an inanimate one, is nearly unbelievable. In a scrap-depot of South Eastern Railway I visited for inspection, I found such a relationship. All kinds of scraps, carriage and wagon bodies, steel frames, posts and wooden items, -to name a few-, are sent here for storage and disposal. One such item was a lot of scrap steel wheel-sets, a few spiked and the others, the normal disc type. No-one knows or remembers when they were actually brought and stacked there. It must have been many years ago. As time passed, a tree grew from a plant lying in between the wheel sets. Its trunk went around the axles of the wheel-sets and these are now lying embedded in the motherly care of the tree. People, who have seen this, feel that this is a little wonder of the world. To me, the wheel sets embedded in the tree looked like children in the loving care of their mother. 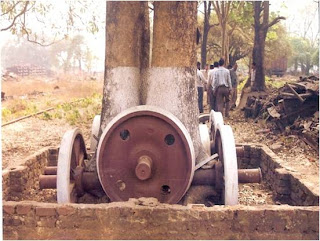 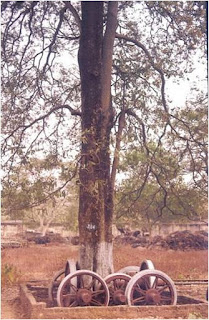 Anonymous said…
Mr. Sen has a very keen sense of observation. Such sights are I am sure all around us, but to note, capture in your lens and then recapitulate is something not many do.Keep observing Mr. Sen and let us know all about them.
December 16, 2011 at 5:33 PM