The Harrier and the Moorhens

November 30, 2011
Debashsis Ray is another friend introduced to me by Mr Swapan Sen ( see the posts here, here and here.I have not yet met him, but I plan to repair this omission the next time I am in Calcutta. He will also contribute to this blog and I am very glad to welcome him and I hope that we will have a long association. Mr Sen has written a short introduction about Mr Ray which speaks volumes about the sort of person he is, my sort of person, I would say! Here it is: One of my friends, a retired Chief Mechanical Engineer of the Railways, Mr. Debashis Ray, also sends various write-ups based on his own experience to his close friends. For quite some time I have been wondering if I may introduce him to you. He is an interesting character and a good writer of real life stories. He has a touch of subtle humor in his stories and the technical articles that he writes and sends to his friends. I met Debashis in 1969 when, as a Railway probationary officer, I went to stay at Jamalpur Gymkhana, - which was the hostel of Special Class Railway Apprentices (SCRAs) inducted to the Railway Service through the UPSC examination. The SCRAs were required to complete a 4 year study-cum-training course at Jamalpur and during their stay at Gymkhana, quickly learnt all kinds of pranks for applying on visitors like me. The boys were notorious for their ragging and were a dreaded lot to their juniors as also senior officers, who used to stay at Jamalpur. Fortunately for me, I escaped from their clutches for two reasons. I quickly accepted the most notorious of the boys as my friends, started playing various games with them, both indoor and outdoor. Then, my friendship with Debashis saved me from being harassed by the others. Debashis was different from the lot at Gymkhana and though of average build, he was regarded with awe and respect because of his prowess in martial arts. He was then in his pre-final year class of the Indian Railway Institute of Mechanical and Electrical Engineers (IRIMEE) at Jamalpur. For several years Debashis was associated with Eastern and South Eastern Railway and in course of my working with him, I too learnt a lot from him. He is a specialist in corrosion problems and I was introduced to this subject by him. I found him to be a wonderful person, -a great orator, a specialist on birds and reptiles and animal behavior, and a true nature-lover. His short stories on human behavior are also great. Equally wonderful are his technical write-up, which he presents in his inimitable fashion of storey-telling that can be understood by all. He now runs a home for Spastic children. I am posting a superb short write up about a one of his experiences with nature. "It was a cold and windy day. The wind was riffling the water of the small pond near my home in Andal, each gust sending waves across the water in successive dark bands. It had pushed the floating water hyacinth piling to the opposite bank. Only the lily pads and the thicket of ipomeas on the far side remained firmly rooted. Most of the birds who normally came to this marshy pool had sought shelter. But not all; near the lily pads swimming like ducks, were a pair of dark birds, the size of half-grown chickens. They had red yellow beaks and some light spots on their flanks-Indian Moorhens. They were not alone. Swimming on the water between the adults were two little black balls-chicks in down. 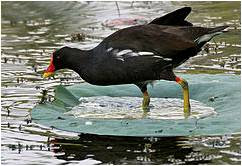 The chicks were the size and color of squash balls, hardly able to keep up with their solicitous parents protecting and guiding their every move. The chicks probably were only one or two days old. The little family was swimming between the lilies and hyacinths, when one adult bird skittered over the water and dived, only to emerge a few metres ahead. The second adult gave a sharp ‘Keank!’ call and frantically tried to chivvy the chicks towards the hyacinths. 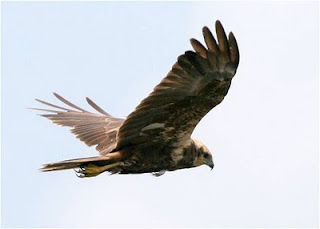 A large kite like bird had just sailed over the little pond. Sitting with my back propped against a gnarled old tamarind tree next to the pond I had not seen its approach. This predator was brown all over like a pariah kite, but with a long rounded tail. It had a pale yellow cap and light colored patches on the leading edge of the wings. The legs were thin and long. It was a female Marsh Harrier seeking prey. The harrier hovered five metres above the chicks, as the mother (?) bobbing her head tried to drive the chicks to safety of the water hyacinths. Out of fear or because they were naïve the chicks swam, but towards the lily pads. The harrier dropped a metre still hovering, its long legs dangling. The hen dived again but came up immediately renewing her effort to protect her chicks. All the while the other adult kept swimming agitatedly but keeping his (?) distance. 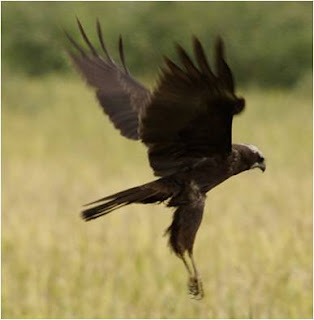 The harrier flapping in the wind slowed and dropped another metre. The hen squawked in fright, dived and came up the next moment, a metre from her chicks. Now the harrier came down then rose, and one foot clutching a downy black ball, banked and sailed away with the wind." The photo credits for the pictures are as follows: GM Garg, Wikimedia Commons ( moorhen) Lip Kee, Flickr ( for the flying Harrier) Mohanram Kemparaju, Wikimedia Commons ( for the third picture ) For the life of me I could not put them alongside the pictures!