The Match of the Century: Boris Spassky and Bobby Fischer. 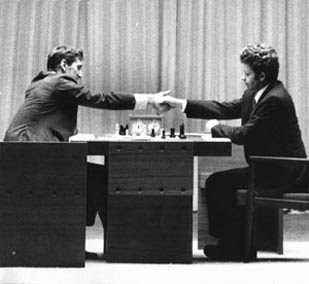 Chess was much more popular in our schooldays that it is now. At that time it was common to have chessboards at home and impromptu chess tournaments in the para between the local chess “masters” were extremely common. We were all familiar with the notations used for chess and the Sunday newspapers used to invariably carry a column on chess. The better chess players were admired as the brainy types and it was a a sport approved of by the elders who frowned on many games as a waste of time. Today, despite the fact that we have a homegrown world champion and many very competent grandmasters, the sport appears to have declined in popularity. This, despite the ease with which aspiring chess champions can access libraries of chess games and the availability of professional guidance. Or perhaps it is still popular; I simply am cut off from the milieu that plays chess.
Anyway, during the middle of the year 1972, the game reached the peak of its popularity. This was of course, because of the famous match of the century between Boris Spassky and Bobby Fischer. This match, which was billed by the media as a sort of West vs the Soviet Union battle caused a sort of interest that few sporting contests can match. It seems unbelievable now, but as I recall it, it was created much more of a buzz that even the Football World Cup does nowadays. We were then in Class 10. We were all pro Soviet Union. After all it was just one year after the infamous American tilt towards Pakistan, which we overcame with the help of the Soviet Union leading to the birth of Bangladesh and a bloody nose to the “imperialists”.
And then came the World Championship match. Played over three months from July to September 1972, the match almost never happened. This was because of Fischer’s antics. He wanted more money; he wanted to play without spectators. He wanted this, he wanted that. All this deflected the attention from the chess itself and was probably a ploy to distract Spassky. Mind games, Mark 1 as it were. However after all the problems were solved, the match finally started on 11th July.
Spassky was the poster boy for the Soviets. A very typical establishment man, he had come up via the Soviet chess machine and was its favourite son. He came across to all of us as as a decent person and as far as I remember most of us were solidly backing him.Fischer was a typical American. Brash, talkative, arrogant and boastful, he typified all the features that made Americans hated all over the globe then, even by those who lived largely on their largesse. He turned up late for the match, and made many impossible demands, all of which Spassky accommodated very politely.
And Spassky won the first match. Fischer made an elementary mistake and before he knew it he was one game down. He forfeited the next match because he refused to start on time. We were ecstatic as Spassky went 2-0 up. But it was from the third game that one realized that Fischer was truly the greatest player the world had ever known, at least till that time. He won seven of the next 19 games, dethroning the Soviet champion and the title left the Soviet Union for the first time in more than a quarter century. Fischer became an instant celebrity in the USA. He had a ticker tape parade in New York and accolades were showered upon him. He was singlehandedly responsible for the huge chess boom that took place in the US and all over the world at that time. 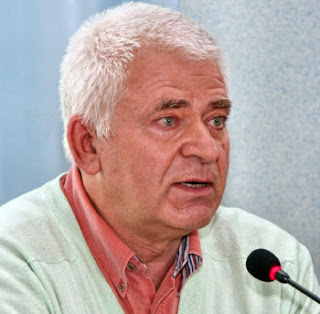 Unfortunately Fischer refused to defend his title the next cycle of the World Championships in 1975, again for extraneous reasons and lost his title to Karpov. He subsequently basically retired from the competitive chess world, began to abuse the Americans and the Jews, and moved from East Europe to the Philippines where he allegedly fathered a daughter with a very young woman and then moved to Japan and finally to Iceland and he died in Reykjavík, the city where he had his greatest triumph. He was probably mad by then. The drama did not end there. His estate was fought over, after his death in 1998, by several parties, including the daughter he had allegedly fathered in the Philippines, his nephews and a wife he had “probably” married in Japan. His body was exhumed to provide a DNA sample which proved that his Philippine daughter was not, after all, his daughter and his Japanese wife got all the spoils. 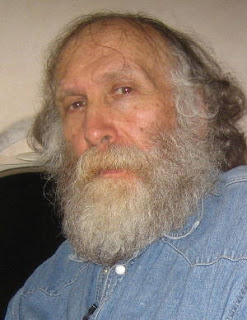 Fischer in Iceland during the last phase of his life.
Be that as it may, Fischer was definitely one of the most colorful characters who have ever played chess and was instrumental in causing a huge spike in its popularity. I remember that during the match, we used to religiously follow the moves when they were published in the newspapers and even tiffin times were spent playing chess, something that was unique in our school where usually the lunch hour was the time we spent in letting off steam as boisterously as we could. Not a very savoury person, was Bobby Fischer, but definitely somebody difficult to forget.
Chess Fischer Spassky

Subhorup Dasgupta said…
Thanks for bringing these games back so vividly. This is just a quick comment to let you know that chess and study of chess is alive and well. People still study and recreate classic games like these in the bylanes of the old city in Hyderabad, on the pavements of Gariahat in Kolkata.
November 18, 2011 at 6:13 PM

akdcts said…
I am glad to hear that. I think I am falling into tthe typical middle aged syndrome of thinking that " things were much better then"!!!
November 20, 2011 at 5:57 AM

Anonymous said…
Hi,
I found your site to be extremely useful in a paper that I am writing for my school. Is there anyway I can have the information necessary to cite this site and yourself, such as your full name.
Thank you very much, Alex
November 29, 2011 at 6:58 AM