The Unsung Heroes of the Indian Railways

November 01, 2011
Travelling by train, especially between major cities, has become little passe for us middle class in today's era of cheap flights. However the Indian Railways still carries 17 million passengers every day, more than the population on an average sized country. The people who keep the wheels running are not acknowledged, and often ignored by the passengers who benefit from their work. Swapan Sen writes about the unsung heroes of the Indian Railways. 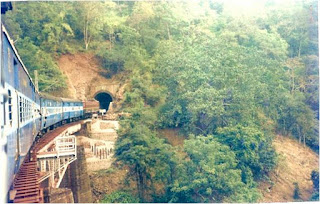 I met Nageshwar Rao at a railway level crossing in Araku valley, where my car was held up as a passenger train was passing by. Nageshwar was the gatekeeper at that crossing and was busy showing his green flag to the driver of the train. A cheerful man in his early thirties, Nageshwar had been doing this day-in day-out for the last five years. He had made his little cabin his home with the loving care of a house-owner, converting the little space in-front into a picturesque little garden. A flowering Bougainvillea creeper, Marigolds blooming on little plants and wild flowers from the surrounding hills, gave his little home the ambiance of a blissful heaven. He was away from his family for quite some time and could visit his home once in a year, that too only when a relief is available. Nearby, there was no hospital, no school for children, and no shopping centre. The local village weekly-market was all that was accessible to him for buying his day-to-day needs. Yet, he did not regret doing his job as the gatekeeper of the level crossing. On the other hand, he appeared to be rather proud of his work. His pastime was nurturing his little garden and talking to all those, who stopped at the crossing. A set of red and green flags, a couple of red banners, which is put across the railway track to stop trains in emergencies, a few hand-signal lamps, a can of detonators and a hand-operated magneto-telephone were all that he had to ensure safety of all when the trains passed. 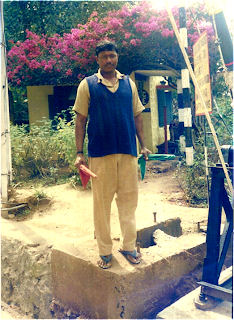 In case you wonder, - what special duty the gatekeeper at a railway level crossing performs, - you have to know that a majority of the railway accidents takes place all over the world at level crossings, despite improvements in safety standards. Trucks and cars are always in a hurry to cross the railway track even when a train is seen to be approaching the crossing. The young heroes of to-day are also at times encouraged by stunts in movies. “The Fast and the Furious” shows Vin Diesel and Paul Walker engaged in a cliffhanger of a drag race that culminates into both the cars flying through a railway crossing narrowly missing being hit by a speeding train. In Bollywood’s Mausam, Shahid Kapoor is shown speeding with his friends in an automobile at an unmanned railway crossing to avoid a speeding train. As a matter of fact, accidents are galore in real-life even at manned railway crossings. As recently as in September, 2011, a driver in Buenos Aires miraculously survived after driving across a railway track - and being hit by an oncoming train. Video footage from the front of the train shows the car driving onto the tracks, despite the level crossing gates being down. The accident comes less than a week after another smash in Buenos Aires involving a city bus and two passenger trains that killed 11 and injured around 200. In that accident, the bus driver also went around the gates at a different level crossing on the same line. On July 19, 2011 at Kirknewton, Scotland, a train almost hit a car, which drove across the level crossing just before 11am. Two ten-year-old boys were spotted racing across the tracks as the barriers came down. Therefore, on a busy road crossing the railway track, the gate man has to remain extremely alert and make sure that the level crossing barriers are pulled down and locked as soon as he receives the message that a train is approaching the crossing.
Well, there are many Nageshwar Raos all over the Indian Railways manning the level crossings on the busy roads, locking and unlocking level crossing barriers, signaling the approaching trains with their flags, yet leading a lonely life away from their families. If a truck gets stuck on the railway track, they swing into action according to the prescribed drill -- placing red banners across the track at predetermined locations, fixing detonators on the rails, the first one at a point 600 meters and the next one at 1200 meters before the level crossing. In the event the train still approaches an obstructed level crossing, he has to sprint towards the train too, waving his red flag during the day or the signal lamp at night, to alert the driver of the train. Not an enviable work, -- with all our love for the nature, neither you nor I would like to remain away from the relative safety and comfort of urban life for such a job. 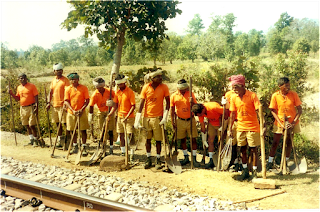 Nageshwar Raos are not the only ones, who sacrifice a good part of their lives to make the vast Indian Railways run their trains across the country, carrying goods and passengers. You could not have failed to notice the orange-shirted, khaki-clad men carrying rakes, shovels, pick-axes, hammers and the track-gauge measuring bar, raking the ballasts in between the sleepers, hammering the spring clips or inserts into the bearing plates or nudging the rails to make sure that the distance between the faces of the rail-tables is maintained. They too spend most of their lives in places, where basic amenities are practically unavailable. Come rain or storm, they go on their beat to check the track and maintain it according to the prescribed standards so that you and I can travel safely on trains. For most of such gang men at work, there is no senior supervisor accompanying them to continuously monitor that they do their job well. They don't really need one, as they never rest till they complete their job in the allotted section. I have seen such gang men at work in remote hilly tracks in Lumding-Badarpur section of the Northeast Frontier Railway without a supervisor. They left the track as my train approached them and again set down to work as the train passed by.
The Indian Railways do have excellent managers down the line. But the trains could not have run on its 64,000 km network without the sacrifice and hard work of its unsung heroes, the Nageshwar Raos. 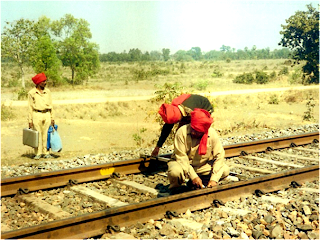 Unknown said…
Very well written and the theme, Indian Railway, present and past always blows a whistle in the heart. Thanx Anjan.
November 1, 2011 at 2:27 PM

Anonymous said…
I hope NAGESWARA RAO and his friends get to know how much their work is appreciated. I can also think of the laborers who construct roads in India at high altitudes in the blistering cold and away from their homes toiling day in and day out so that we get to see beautiful places like Badrinath or Leh & Ladakh.
November 9, 2011 at 8:49 AM