plus ça change, plus c'est la même chose, i.e the more things change, the more they remain the same 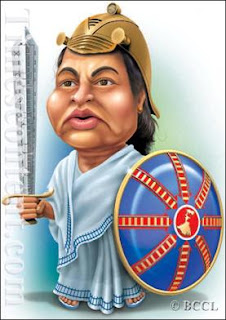 ( picture from http://sauvik.wordpress.com/2010/07/23/train-spotting-with-mamata-banerjee/)
The new dispensation in Bengal is panning out exactly how I had expected it to. But even I could not imagine that the Chief Minister herself (she is also the Home Minister) would rush to the local thana to force the hapless policemen to free some hooligans that they had detained. According to the newspapers, one of Madam’s brother’s cronies was celebrating Jagadhatri Puja and the best part of all pujos in Bengal is the bhasan, when all organizers can get drunk and create as much nuisance as possible on the streets with little possibility of retribution. And that was exactly what they were doing, bursting crackers outside hospitals and holding up the traffic with their dancing and revelry. The poor policemen of the Bhowanipore Thana who had probably taken Madam’s words to work without fear or favour too literally put a couple of them behind bars which was probably where they belonged. However, when the news reached her, she rushed to the police station and forced them to release the culprits and the revelry recommenced. One day later higher ups at Lalbazar, who are evidently more intelligent than the cops on the ground discovered, that the policemen were at fault after all. The poor dears of the Trinamool Congress who burnt several vehicles and trashed the area were merely expressing their democratic rights. You can read about it here and here.
Mamata Bannerjee’s gamelan seems simple and it is uncannily similar to what the Left Front had done in 1977. “Blame the Centre” always works very well in Bengal. It has a long history harking back to the early years of the last century. This is not to deny that we were sometimes right, but it is difficult to find fault with Pranab Mukherjee or Manmohan Singh if they refuse to take somebody who routinely asks for 100,000 crores and so on while refusing to cut down on expenses on a bloated bureaucracy or even allow train fares ( now unchanged for 8 years) or electricity rates to rise even as the concerned departments collapse. The logic of promising everybody free lunches and then screaming blue murder when asked to pay for it was technique perfected by our commie pals and now Mamata promises to outdo them in this just as she outdid them in competitive populism.
I was recently in India and I asked around informally about what people thought of their new government. The consensus of this entirely unscientific opinion poll was that “she seems to mean well, but, er, nothing much has happened yet.” Now the question is beginning to come to everybody’s minds: will anything happen at all? Or will it be 30 more years of the same thing?
Let us take the question of Health administration. In her early days Madam kept gate crashing into hospitals and ordering officials to admit somebody or give somebody else some treatment or other. In the process one poor guy in BIN lost his job. Now fortunately she has stopped this nautanki at least. However there has been no activity that suggests that there is any attempt to rectify the mistakes that the previous government had made. Every day I read that there will be a new advanced tertiary care unit opened in a remote district. No one speaks of who is to man it, how that manpower is to be trained and how long it will take. In the Ministry of Health website there is a Plan of Action 2011-2015. In the vision statement the first part is “affordable, accessible, sustainable, high quality essential health care for all in 5 years.”There are 10 focus areas, gathered together by some lazy bureaucrat from the documents that are generated by WHO and the Indian Health Ministry. It could also been copied from a textbook for all I know. There is no mention about how these goals will be accomplished, except for platitudes. Some examples:
“ Establish the neonatal care units in secondary/primary care institutions: Purulia
model
• Strengthen the adolescent care services specially ( sic) for girls
• Scale up ‘Save the Girl‐child’ campaign to improve the sex ratio
• Establish additional sub‐centres based on 2011 census
• Implement cashless delivery and free transport at all hospitals
• Establish one functional Basic Emergency Obstetric Care Centre within 6 km radius
and one functional Comprehensive Emergency Obstetric Care centre within 25 km
radius”. No mention of any plans to implement these grandiose plans.
I have not closely examined the other areas, I am sure there are some half-baked projections which have no chance of being implemented anytime in the next 5 decades.
However some rays of light still exist. I am told that the present dispensation is still listening to people other than their own. Perhaps they will hammer some sense into them.
I am pessimistic by nature when I think of West Bengal. I have a sinking feeling that it is business as usual and we have shot ourselves in the foot again.
God bless West Bengal or Paschim Bangla.